The Collserola mountain range forms the northern barrier to Barcelona's expansion. It overlooks the city, one of the densest urban areas of the Mediterranean 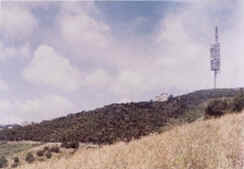 coastline and consequently has required the greatest management. The south-facing slopes are very steep in contrast to the gentle north-facing slopes. The differences in aspect are reflected in the vegetation, with meadows and shrub land on the sunny slopes, and forests of evergreen and deciduous oak in the shaded areas.

The Collserola is composed of two types of rock: metamorphic (slates, quartzites, metamorphic limestones) and igneous (granite). The granite has weathered in the wetter areas to a very fertile 'saulo' soil, highly valued for cultivation. Many springs are found adjacent to the impermeable granite and the Romans made use of these to take water via aqueducts to Barcelona. The remains of these aqueducts can still be found in the Collserola and Barcelona itself.

Throughout the twentieth century, the growing urban area swallowed up more and more land, resulting in the General Metropolitan Plan of 1976 which defined the large open spaces to be preserved and protected from urban sprawl.

The Park's management plan seeks to conserve the natural resources and ecological balance, as well as developing the area as a leisure resource. Human activities have been regulated through zoning and planning regulations. Management strategies include control of public and private activities, conservation, restoration, construction of leisure areas and environmental education.

A variety of forest ecosystems can be found in the Park. The first is mixed forest with Aleppo pine, evergreen and deciduous oak. A second kind of forest is a true pine forest which has taken the place of the old vineyards which were cultivated until the beginning of this century. This adaptation can be explained by the soil degradation and lack of soil moisture of the former vine cultivation areas. A further kind of forest is also pine in nature but which is evolving towards an oak climax vegetation. These are found on the shaded slopes where there has been an absence of cultivation in recent centuries.

Other ecosystems include deciduous trees and wetland vegetation in the valley bottoms. Hazel predominates on the lower slopes. More open valleys contain another kind of woodland, comprising fast-growing trees which shoot up straight and grow to great heights.

Pine forest is more common on sunny slopes due to the evolution of the vegetation after a fire. When a pine forest with undergrowth on the sunny slopes burns, germination of the pine-nuts is very fast and the pines grow back. On the other hand, when a pine forest on a shaded, damp slope burns, the vegetation which appears after the fire is a scrub of sprouting plants such as evergreen and deciduous oaks and strawberry tree, which choke down the growth of the pine.

Brolla shrub land is found in dry, arid areas on south-facing slopes. The plants are specially adapted to the drought conditions, being dry and thorny. Garrigue vegetation is found in areas with alkaline soils.