History of the Ebro Delta

The delta has only been populated relatively recently. Early human settlements and nuclei of habitation have been found in the nearby mountains in the MontsiÃ¡ region dating back to Paleolithic times but due to the inhospitable nature of the environment there is little evidence of early settlement on the delta itself. The first documented permanent settlement on the delta occurred during the Roman period. The Romans improved the fishing and cattle ranching practices that pre-dated the settlement. This livestock tradition (which still remains to a small extent today) is closely linked to the Celtic tribes, dating from pre-Roman times when shepherds used to bring their herds down from the high cold pastures in Aragon and Maestrat to benefit from the vegetation and the warmer winters on the delta.

During the Moorish occupation of Spain much of Catalonia was under the influence of the Moorish kingdoms and references have been made to Aldea in Moorish history. Some of the place names, like La RÃ pita and Buda, are reminiscent of the time of Arab domination. Following the reconquest of these lands by the Christians the delta was used as a hunting ground for the kings and noblemen. From 1097 to 1154 they were used for game hunting and several kings enjoyed the benefits of the plentiful deer and abundant waterfowl. During this period however the area was still subject to various attacks and raids by the Moors and it was not until the Valencia region was incorporated into the province of Aragon that relative tranquility returned to the area.

In the thirteenth century King Jaume I rewarded the people of the area for their part in the fight for Mallorca by granting public fishing rights to the freshwater lagoons. The Cofradia de Sant Pere has administered these lagoons since that time and fishing has come to form a major part of the subsistence of the population. During the period of inclusion into the Aragon kingdom the export of game, fish and extracted salt to many points around the Mediterranean strengthened the livestock industry in the delta and concentrated human activities in the drier areas of the delta. The manufacture of soda (with a rudimentary soap industry) liquorice, and the trade in leeches was also important during this period.

The area remained unsettled however and was fought over frequently. In the fifteenth century the town of Sant Carles de la Rapita was destroyed along with various other settlements as the wars continued. The first rice was planted in 1607 by monks but had limited success due to their inability to provide enough water for the crop, lack of infrastructure and failure to obtain permission from the Valencian authorities.

In 1719 the first royal concessions were given to farm the land. This marks the first point in history when the land began to be considered as private property. In 1749 authorisation was given to build a canal between Sant Carles de la Rapita but this was never completed. In 1851 permission was given to the 'Real CompaÃ±ia de Canalizacion del Ebro', the Royal Canalization Company, to canalize the Ebro from Zaragoza to the mouth of the Ebro and the construction of a second canal from Amposta to Alfacs to irrigate the delta. There were several attempts to make the Ebro navigable but these achieved limited success due to heavy siltation and throughout the years many engineers were employed to try to overcome the problems that faced the navigation canals.

When Carlos III lifted the trade embargo with the Americas that had been imposed on the Catalonians, a new settlement was created at the head of the navigation canal at Sant Carles de la Rapita in 1780. During this period however the colonisation of the delta was not easy as disease was rife and the conditions were very inhospitable. A further attempt to provide a subsidiary canal along the right-hand side of the Ebro resulted in the construction of what became the Right-hand irrigation canal in 1860. Once the canals has been built the rice fields spread rapidly but many problems, of which the most obvious was endemic malaria (3,000 deaths up to 1918), hindered the establishment of the human population.

The spread of rice after the completion of the irrigation canal was rapid as the figures for rice acreage below show.


It was during the nineteenth century. that the governments began to take land from the church and auction vast estates. Many of these auctions were held in Madrid resulting in the purchase of the latifundia (large real estate plots) by absentee landlords and wealthy military families who had previously enjoyed the hunting and fishing rights on the delta. Furthermore much of the land was colonised by the residents of the area without permission either from the church, government or the new landowners. This marks the origin of many of the current disputes over land ownership since several areas of the delta which are, by definition, part of the Zona Maritima Terrestre (ZMT or maritime territory, ie. foreshore) had been cultivated and passed on through various generations without ever having their ownership clearly defined. Many claimant land owners have successfully pleaded their case and been given ownership rights to the land but other areas remain in bitter dispute.

New settlements gradually sprang up around the old farms ("masos") at Balada, Enveja and Els Muntelis. El Poblenou del Delta was founded more recently, in 1947, under the name of Villafranco del Delta. The population grew from 5,278 inhabitants in 1857 to over 40,000 today. The towns and villages of the delta are Amposta (which includes El Poblenou), Deltebre, Sant Caries de la RÃ pita, L'ldea, Sant Jaume d'Enveja (including Els Muntells), Camanes and L'mpolla.

Agriculture today is one of the main bases of the economy, rice being by far the predominant crop. 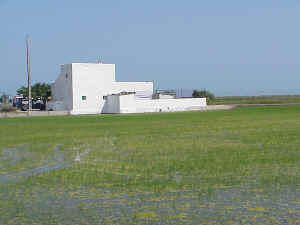 Rice fields occupy 15,215 hectares (37,596 acres) of the 24,554 hectares (60,673 acres) under cultivation arid account for 98% of the total Catalan output. The next most important products are fruit and vegetables. Agricultural cooperatives play a leading role, especially in the production of rice.

Fishing is another important livelihood. The ports of Sant Carles de la RÃ pita and L'mpolla are located on the delta itself, while Les Cases d'lcanar and L'metlla are on the mainland nearby. 9,000 tonnes of fish are caught each year (15% of the total for Catalonia) and provides jobs for almost 2,000 men. There is also some livestock: an estimated 2.000 head of cattle, 10,000 pigs, rather fewer sheep and 2 million poultry.

There is little industry on the delta and nearly all is related to agriculture. Visitors have always been attracted to the delta by the shooting and fishing facilities, though nowadays many are also drawn by the scientific interest of the characteristic flora and fauna, by the exceptionally beautiful scenery and the peace and quiet of the long, almost deserted beaches with their dunes and unusual vegetation.