The Garrotxa Volcanic Zone is situated 100 kilometres to the north of Barcelona, an approximate road journey of two hours. It contains some of the most interesting volcanic landscape in Europe. There are thirty Strombolian volcanic cones, a few explosive phreatomagmatic craters, other alternating Strombolian/explosive volcanoes and over twenty very unusually constructed basaltic lava flows. In addition, the area's moist Mediterranean mountain climate has contributed to lush vegetation and a spectacular landscape. 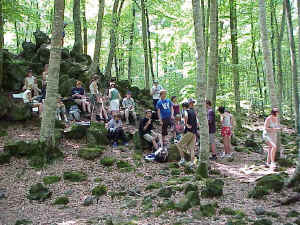 Moves to give the volcanic zone legal status go back as far as 1917 but it was not until 1975 that a serious conservation campaign won widespread support, culminating in protective legislation in 1982. A sharp rise in urbanisation and industrial development in the area had begun to affect the traditional rustic landscape. Volcanic craters were being used as civic refuse disposal sites and a particularly grave threat to the survival of some of the most interesting volcanoes was posed by cinder quarries taking material for use in building block manufacture.

Volcanism is of a basic type, involving basanitic and basaltic lava. The last dated eruption occurred 11,500 years ago, thus though volcanic activity has ceased, it cannot be considered to be finally extinct. The volcanic eruptions varied greatly in intensity owing to the characteristics of the substratum crossed by the vent and especially because the magma encountered layers of water-saturated materials. 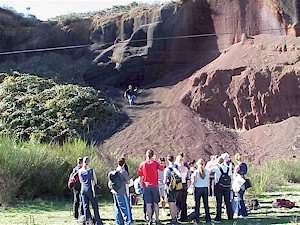 The thirty or so volcanic cones are in a very good state of natural conservation, considering their age. Most of the craters are visible and consist of cinder material: scoriae and lapilli with intervening layers of volcanic bombs. Pyroclastic hecciae are also visible, as well as cineritics and base surge deposits.

At the Fontfreda cliffs, river erosion has revealed magnificent prism-shaped columns while at Castellfollit, spectacular layers of lava from different lava flows are superimposed creating a spectacular cliff with the village sited at the top. At the 17,000 year-old El Croscat volcano, the lava mass has a rough surface covered with lava blocks and numerous blisters (projecting gas bubbles).

The field study course outlined below focuses on the nature and impact of the tectonic activity upon the Garrotxa landscape and the ways in which it has significantly affected the lives of the people who live there. Students use field observations to help understand and reconstruct the eruptive processes and visit a number of contrasting sites to investigate the benefits and costs of living in a volcanic environment. A selection from these options could be provided for a one-day visit, travelling from your accommodation in Barcelona. 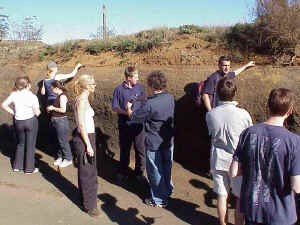 The objective is to analyse the environmental impact of some of the human activities, the actions taken to restore the damaged environments, and produce a management plan for the Park.