The creation of the district

Until the end of the 1960's, La Mina was little more than an area of cultivated fields, livestock and 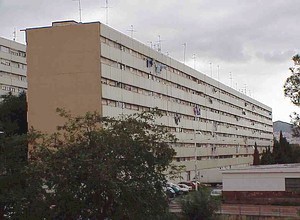 scattered hamlets just outside the Barcelona city limits. At the time Barcelona was experiencing very high immigration from less developed areas of Spain, particularly Andalusia. The immigrants arrived in the city with minimal resources leading to the growth of some of the largest shanty town constructions in the country. Shacks sprung up in many peripheral parts of the city, including MontjuÃ¯c, Campo de La Bota, Perona, Casa AntÃºez, l'Hospitalet and Hospital de St. Pau.

Barcelona had been looking for a solution to this serious shanty town problem since the end of the1950's. A planned New Town in the district was approved in 1959 but not realised. It was not until 1968 that land was purchased by the Barcelona Council for the construction of low-rent housing in La Mina.

Construction began in 1969 but was quickly brought to a halt after the completion of only approximately 500 apartments when the city council realised that the size of the blocks would not permit the relocation of all the shanty town residents. This first development in the district is subsequently known as 'Mina Vieja' (Old Mina).

A rapid remodelling of the development plan allowed for a far greater density of development on the remaining land with the construction of 2,100 further apartments, specifically for the 'chabolistas' (shanty town dwellers).

In April 1971, the Council offered the opportunity for the chabolistas to move to 'Mina Nueva' (New Mina) on the fulfillment of three conditions, that:

1. they already resided in an officially recognised Barcelona shanty town;

3. they promised to pay a small monthly rent for 24 years, which would then give them the right to ownership of the property.

The number of applications received greatly exceeded the number of planned homes and the number of people housed in the district by 1974 totalled some 15,133 inhabitants, living at a density of 5.6 persons per dwelling.

A census at the time revealed some 20% of the population to be of gypsy origin. High levels of social deprivation, including very high rates of illiteracy quickly made the area infamous with newspaper headlines such as 'La Mina: district without law' and 'La Mina: dangerous area'. 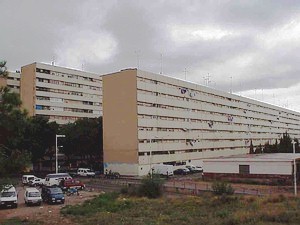 This unfortunate legacy has left La Mina today with the greatest social deprivation within the Barcelona metropolitan area. It suffers from an urban layout which has created enclosed streets within a fortress-like setting, marginalised from the outside world. Population and housing densities are very high, homes are of poor quality with very limited living space. It has above average numbers living in conditions of poverty, with illiteracy levels running at 25%. Unemployment, employment in the informal sector and absenteeism from school are all very high. The degradation of the community has been intense, with high crime rates and serious social fracturing.

Thirty years since the first bricks were laid, a redevelopment plan has been proposed. The main aim of the plan is to improve the quality of life in the district including the social capital (quality of social interactions) and thereby encourage and enable the residents to become positively involved in the next Barcelona grand international event which will take place literally on their doorsteps: the Universal Forum of Cultures 2004.

The initial public consultation stage has laid out the following model:

1. Civic, social, education, cultural and sports projects aimed at preventing social exclusion and promoting equal opportunities. A new pedestrianised 'Rambla' will be constructed through the heart of the district. The plan involves the demolition of 280 dwellings and the construction of 900 new apartments.

2. Employment projects aimed particularly at the young long-term unemployed, to assist them back into the job market.

'(The project) assumes the entry of new people into the district which will not allow it to be a social ghetto'. He believes that the creation of new open spaces within La Mina will create focal points for positive social interactions between people from neighbouring streets and thereby promote social and community growth.

'We first need to reduce the population density of the district'.

'Unless the project reduces delinquency and the drug problem, it will have served no purpose'.

'I like the project because it tries to eradicate the worst aspects of life in this area, yet maintain the best'.

'The project will lead to more people living here in even less space. What next? A wall to keep us in?'

'Is La Mina really compatible with Forum 2004? I hope that the solution will not involve fencing us in with security check points'.

'I have lived here for 30 years and things are worse now than in the shanty town I used to live in'.

'The new Rambla and buildings will split the district into 3 very different areas'.

'There are grave social problems here that will not be solved with new streets and corners'.

The students of l'IES La Mina have sent letters to the Mayor of Sant AdriÃ  requesting:

- a cinema, street drinking fountains a picnic area and park;

- a discotheque for the 12 - 16 years age group and indoor swimming pool;

'The change in image of La Mina is more important than the actual physical changes; breaking the stigma will assist its development' (El PeriÃ³dico 23-4-01).