These are the inner city districts that receive more than 30 million tourists every year, triggering the high crime rate per inhabitant

The historic centre of Barcelona has the highest crime rate in Catalonia: 40 crimes per 100 inhabitants in 2016, from an analysis of the Mossos d'Esquadra (Catalan police) data.

The high crime rate is directly related to the thousands of people who visit the area every day but do not reside in that district. This contrasts with the rest of Catalonia , where the registered crimes range from one to ten per hundred inhabitants. During 2016, there were a total of 40,822 crimes in Ciutat Vella and El Raval, 93% of which were thefts and robberies on public streets.

La Vanguardia has processed this data and illustrated it in an interactive map, prepared from the raw information published by Mossos d'Esquadra. This is a result of the introduction of the Catalan Transparency Law, where the police force proactively posts on its website the group of crimes committed in Catalan territory. The data offered by the Catalan administration, however, are distributed by police region, without weighting by population. This tends to blur or obfuscate the real impact of crime in the district of Ciutat Vella and El Raval.

87% of the criminal acts that were registered in the Government database during 2016 corresponded to crimes against the patrimony and the socioeconomic order , that is to say, corruption, fraud, theft, occupation of buildings and scams, among others.


The exceptional nature of Ciutat Vella

It is not true that 40 of every 100 residents of Ciutat Vella are victims of crime, sources from the Security Department of the Barcelona City Council explain. "If we take into account the fluctuating population, the rate becomes one of the lowest in all of Catalonia."

The Ciutat Vella loses population year after year due to the rise of non-residential uses such as hotels, offices, tourist apartments and public facilities. In the last ten years the district has lost 13,000 residents.

As the tourist epicentre of the city, it is the capital of robberies and crimes without violence, which are more difficult to prosecute when they are committed against tourists. "With the beach, the tourism and the large numbers of people, Ciutat Vella is candy for the thieves ", explain local sources. 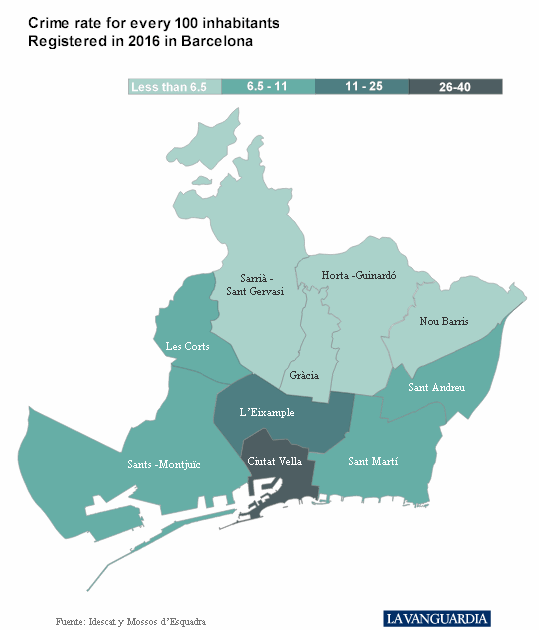 More than 30 million people visit the city of Barcelona annually , and the vast majority are divided between the district of Ciutat Vella and the Eixample. This also accentuates the crime rate in the Eixample, the second highest in the city and in the whole of Catalonia, with a ratio of 15 crimes per hundred inhabitants during 2016.

Besides the influx of foreigners, the network of streets and squares of Ciutat Vella host thousands of people who come to shop, file paperwork with institutions, visit its varied cultural centres, party or participate in demonstrations. According to the latest count of the town hall, only 273,000 people pass through the Rambla every day.

With this influx of people what is "strange is that the rate of theft is not even higher," explained the City Council. They insist that the joint actions of Mossos d'Esquadra and the Guardia Urbana (local police) is key to preventing the number of robberies from increasing.